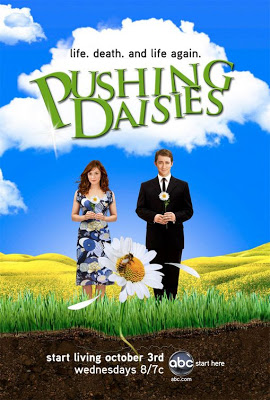 “One of the best new TV series of 2007”, said Time magazine, referring to Pushing Daisies, the new ABC series which premiered in the United States on October 3, 2007. In fact, the first episode of the show was a huge hit, attracting over 13 million viewers all over the country and it has amazed everyone with its original plot and unique visual design, that can be defined as something between Amélie Poulain and Tim Burton’s films.

In Brazil, Pushing Daisies was first aired on April 10 (and it’s on every Thursday, from 9-10 p.m.), on Warner Channel. For some months, viewers had been intrigued by the going-back-to-life and returning-to-death scenes from the show’s ads, not really knowing what was about to come. The series pilot impressed indeed and news spreads all over the internet have popped up with positive reviews. Only the two first episodes have been on air on Warner up to now. But chances are that the Brazilians won’t have a break between seasons 1 and 2, due to the Writers Guild of America strike that forced the producers to launch only 9 out of the 22 episodes programmed for the first season. Work should be resumed in March, 2008, but episode 9 was designed to come out as a season finale just in case.

Basically, the show is about the story of Ned (Lee Pace) and his very special gift of bringing people back to life. All he has to do is to touch someone once and they’ll immediately gain life again, as for magic. The only “if” is that Ned can never touch them once more or the opposite effect will take place and they’ll be condemned to death forever. As a young kid, Ned discovered his unique ability by giving life again to his dog Digby (a well-trained Golden Retriever), after it was hit by a truck. Later on, the cruel side-effect of the new found skill was painfully learned when his mother, who had also been revived by him from an aneurism rupture, kisses him goodnight and falls back to “sleep” permanently. There’s also a very curious detail about time in this process: Ned’s got exactly one minute to return people to the dying condition, or else, as to promote some compensation balance, someone else usually from nearby, will drop dead instead. He also noticed it the hard way: 60 seconds after reviving his mom, Charlotte “Chuck” Charles (Anna Friel), his childhood sweetheart, saw her father pass away for apparently no reason at all. Due to all these nefarious events, the boy is sent away to a boarding school, where he grows to be a lonely, mysterious man. Meanwhile, he develops another talent, actually inherited from his mother: he can bake delicious pies and, as an adult, he opens his own pie shop, called “The Pie Hole”. That’s when he meets Emerson Cod (Chi McBride), a detective who witnesses one of his bizarre performances. The shop itself has not given the financial payback Ned expected, so, willing to make some “easy money” out of his talent, Emerson suggests that they work together by solving hard to explain murder cases and split the reward between the two. Their method would be simple: bring the victim to life once more and have him or her tell how they actually died. One minute later and before second consequences, Ned would put them back to the original non-living condition they had met them. Things begin to change when, trying to solve a case, Ned discovers the dead person to be Charlotte (Chuck, as he used to call her), his friend from the past, whom he continued to love up to the present days. With Chuck’s vivacious personality back to his conviviality, he decides not to send her back to her fatal destiny and the girl becomes their partner too, despite Emerson’s disagreement. The episodes go on with this giving life-solving case-returning to death triangle in midst of parallel stories, such as Olive Snook’s (Kristin Chenoweth), The Pie Hole’s waitress, who’s secretly in love with Ned and also for the random appearances of Charlotte’s aunts, who took care of her after her father died.

Besides the original and somehow comic plot, Pushing Daisies delights the viewers’ eyes with its visual design and color treatment. Production designer Michael Wylie stated that his goal was to have a storybook come to life, where everything would look almost like an illustration. In fact, the feeling one gets from the color patterns, particularly reds, oranges and greens with no blues, sends out the impression of something big, bright and bigger than life. Other features, such as the characters driving well-preserved old models cars and also the alliteration and duplication in their names (Charlotte Charles, Billy Balsam, etc.) help build this theme of surreality and oddness to the show. Despite all this, it’s a story about the value of life, love and the inevitable certainty of death that permeates every episode.

So far, the show’s been on air in over 10 countries, including places as far as Turkey, Israel and Australia to England and Latin America. The reviews have been mostly positive and in the United States, it’s expected to be ABC’s new Lost. As far as awards are concerned, Pushing Daisies started on the right foot: it won “The Best New Series” award (The Family TV Award) and “The Best Television Series, Comedy or Musical (The Satellite Awards), among others and it was twice nominated for the Golden Globe, both for the best actor (Lee Pace) and best actress (Anna Friel). The future unveils bright: let’s wait and see if the promise to be the best TV series of the year really comes true.