From Russia with love

Browsing through YouTube, every now and then you come across things you just can`t name. Searching for an old folk Russian song, I`ve just discovered (yeah, late enough…) another Russian jewel, as precious to say the least. The lady you`re about to hear is Sophie Milman, born in the Ural Mountains and a jewish descent, who now lives in Canada. Her jazzy background comes from the years spent in Israel when she extensively listened to the genre as a child. 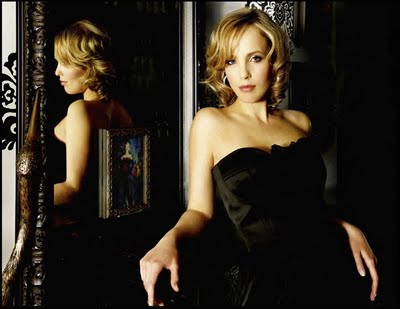 Since her debut in 2004, the singer in her mid-twenties has achieved a lot in an early career. Her first album hit number 5 in the Billboard charts and sold 100,000 all around the world. In 2008, she won the Juno Award prize for the Vocal Jazz Album of the year and on and on her touring schedules have filled the bottle in Europe, US, Canada, Mexico and Japan.

A knock-out, a wild and refined talent altogether, music overflows Sophie Milman. Below you can get just a “tiny bit” of entertainment on Sophie`s work and her perfect renditions of some jazz classics. To conclude, the singer takes a soft and skillful walk around every major piece of jazz music ever written in several languages, so take your time (it`ll pay) and allow yourself the pleasure of listening to her singing in English, French and in her native language as well. At the end, a gift to Brazilian listeners.

Here`s to you, Sophie Milman herself.

Soulful, almost dramatic, Sophie managed to take “Fever” to a next level of depth and intensity, softening its sexy natural vibe for a more heart-felt and true rendition.